Cavli’s CE certified C1RM is the LTE CAT NB-IoT Smart Cellular Module with a 2G fall-back option that comes with an integrated eSIM (Embedded SIM). C1RM is specially designed for countries in regions such as APAC, EU, and MEA with less than 100% NB-IoT coverage or upcoming NB-IoT network, where LPWAN deployments can also happen in 2G, and switch back to NB-IoT over-the-air through the Cavli Hubble IoT platform whenever the network is ready. The integrated eSIM coupled with Cavli Hubble global IoT connectivity ensures that the module can be deployed across the globe. 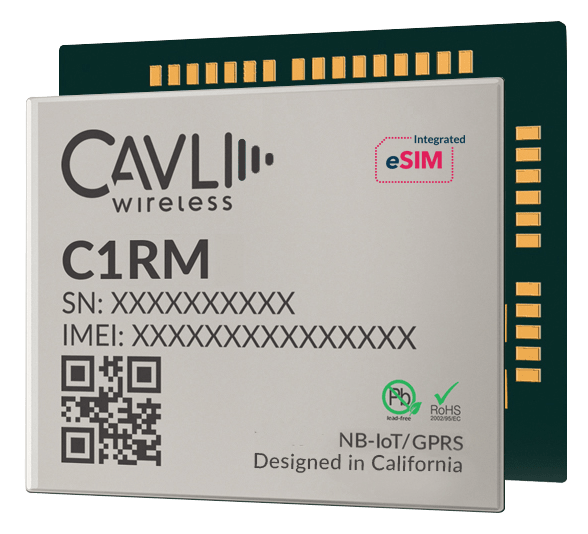 C1RM strength is in local IoT network connectivity through Cavli Hubble cloud solution for regions supported by the smart module. This lets customers build one solution for multiple regions. At the same time, implementation and training time is reduced, on- premises IT infrastructure is not a must anymore, system administration and maintenance are simple and cost-effective for customers, resources management is optimized and opportunities for synergy of applications are available.

C1RM is preconfigured with 'Cavli Hubble Stack' which enables it to communicate seamlessly with Cavli Hubble wherever it is deployed. Easily scalable C1RM Plug and Play implementation, with support for TLS 1.2 and HTTPS protocols, influence Smart City evolution and provide optimal infrastructure for sensitive applications and services.

C1RM has built-in eSIM capable to automatically switch operators if necessary, with specific flexibility provided by Pay-as-you go global data subscription mode. This is to ensure that the device stays connected with the help of the multi-network access system facilitated by Cavli Hubble. Important IoT protocols for M2M connectivity (MQTT), connectivity between constrained devices and nodes on the Internet (CoAP) and for M2M and IoT devices management (LWM2M) are implemented. These features are ensuring non-break connectivity (UL – 27.2 Kbps, DL – 62.5 Kbps) and fast-tracking IoT implementation, in variety of environments (C1RM dimensions are: 23.6*19.9*2.4 mm) and wide temperature ranges (-35°C to +85°C - operation / -45°C to +90°C -storage).

C1RM deployment is ensured globally. It represents the smartest and most reliable way to bring quick, comfortable and reliable wireless IoT connectivity. C1RM fast-tracks the Smart City deployments world- wide, by the intelligent and proven utilization of described features.

Why is the integrated eSIM technology a paradigm shift in IoT product development?

Mobile M2M applications, especially those that are applied globally, are burdened by the fact that SIM card management can be very complex, resulting in significant administrative procedures and costs for large-scale applications in the field. However, the use of the C1RM with an integrated eSIM card brings significant benefits and offers users the ability to change service providers over the air, without having to physically replace the SIM card itself, or phones. eSIM represents the most radical change in the last two decades of GSM connectivity, meaning the C1RM users can choose and change the profiles or service providers globally, in accordance with their needs.

Directly embedded into the C1RM, the eSIM is remotely reprogrammable, so the management of its subscription credentials is not so complex anymore. Besides, benefits are also cost optimization of large scale M2M projects which will not need to worry about the delayed launch of NB IoT networks. Get started on 2G and seamlessly switch to NB IoT when the time comes.

The production of any smart device involves the primary expertise of a chipset manufacturer who produces the device’s connectivity hardware module and OEMs & ODMs who finally manufacture the smart device. Their role has always been essential but limited until eSIM appeared on the market. eSIM capability became very important and is affecting some new relations and partnerships. When an OEMs/ODMs buy, C1RM with integrated eSIM - that package includes instant connectivity. C1RM with integrated eSIM enables OEMs/ODMs to establish a direct relationship with the customers because e-SIM allows it.

The general conclusion is that C1RM with integrated eSIM technology helps OEMs/ODMs benefit from cost effective global IoT connectivity, improve their position in the market, and develop new relations with customers.

How C1RM can enable telecom operators for LPWAN network planning?

Unconditional connectivity is of the utmost importance for the IoT landscape. One of the NB-IoT’s crucial performances is the indoor coverage and makes it an optimal solution for scenarios where other wireless technologies are facing problems. This feature of NB-IoT technology fulfills and exceeds expectations when compared to traditional cellular wireless technologies, such as 2G/3G/4G. It especially becomes important inside buildings, in basements, garages, underground facilities, etc.

Penetration Stats of NB-IoT networks as on Sep 2020

At the same time, 2G technology with a typical link power of around -113dBm is still present in many countries, regardless of the facts it is power consuming and mostly overcome compared to other 21st century wireless technologies.

C1RM is an effective solution capable of bringing IoT connectivity to the existing 2G or LTE CAT NB-IoT networks. Supported LTE CAT NB radiofrequency Bands are 3/5/8/20/28 and quad radio frequency bands for GPRS. Operating modes according to the available frequencies are In-Band, Guard Band, and Standalone. In compliance with national regulations, this feature is very important to meet the customer needs in congested Smart City areas or rural areas where network infrastructure and coverage can be limited.

The C1RM decision between NB-IoT or 2G connectivity is correlated to the available network coverage. Together with Cavli Hubble, APIs are available for analysis on what percentage of time the C1RM is connected to NB-IoT or 2G. This C1RM feature presents a significant and powerful tool for mobile operators to perform cost-effective field tests and real-time network coverage measurements or to plan its further development. C1RM is ensuring user-friendly and cost-efficient network deployment and management through Cavli Wireless proprietary cloud platform - Cavli Hubble.

Although obsolete, 2G technology is becoming significant again and interesting in terms of data transfer capabilities for IoT and M2M communication in many countries worldwide. Considering the fact that C1RM is not only on standard NB-IoT but also the GPRS module/modem, it could be interesting for many companies deploying and relying on 2G based solutions for M2M communication.

C1RM is designed with a 2G fallback to ensure coverage in some rural areas, by providing development and acceleration for smart agriculture and farming. It offers IoT connectivity that exists and is available through 2G, while NB-IoT technology deployment is bringing coverage to some other targeted areas and priorities, for example - smart cities.

Are you building an IoT Product and wanting to hit Go-to-market at the soonest possible date?

Now achieve Prototyping to Sampling to Mass Production in under 3 months with Hubble99. Purchase the NB-IoT/2G C1RM IoT Modules available in Hubble99 IoT bundle offer and start your journey towards Building, Connecting, Scaling & Launching your smart devices at just $0.99/device/month

Reach out to our IoT experts at solutions@cavliwireless.com to learn more